If you are a fan of food delivery service apps and you use them often, you are probably familiar with the Uber Eats platform. Uber Eats operates on almost every continent in the world and over six thousand cities. If you are wondering, “is Uber Eats in China?” this article will help you find out and give you some useful information about food delivery in this large Asian country.

Uber Eats is currently not available in any city in China. This might come as a surprise, as uber Eats used to be available in Hong Kong, where it operated quite successfully. Although it is no longer available in China, there are plenty of other apps in this country that you can use for food and drink delivery services.

Is Uber Eats in China?

Uber Eats is one of the largest food delivery platforms in the world. The company operates on a few continents, over 45 countries, and 6,000 cities. The majority of the biggest cities in the world are working with Uber Eats and using its service, however, not all of them. If you are planning a trip to China or are looking to relocate there and wondering if this large food delivery platform is available – you should know that it is not.

You might be surprised to hear that UberEats is no longer available in China because this company used to operate in Hong Kong. However, Uber Eats stopped its services in Hong Kong on December 31 in 2021, after five years of partnering with restaurants in Hong Kong.

The fact that Uber Eats decided to stop cooperating with China confused many people, but there were many reasons behind this move. While Hong Kong used to have 1.5 million users of Uber Eats, the platform is currently not available in Hong Kong, or any other city in China, and there is no news about whether this situation will change anytime soon.

Meituan Waimai Is One the Biggest Food Delivery Apps in China

Even though Uber Eats is no longer available in China, there are plenty of other food delivery service apps which you can use while in this country. One of the biggest food delivery apps is Meituan Waimai, founded by the Chinese corporation Meituan Dianping.

This food delivery app became very popular in the last few years and has even surpassed 100 million app downloads across iOS and Google Play software across the world. The company delivers a wide range of items, from fast food, local cuisine, drinks, fresh fruits, groceries, and even pharmacy items. It is a very developed platform working with more than fifty thousand restaurants across more than 250 cities in the nation.

The App Is Also Available in Cities Outside of China

What started as a local app, became a world-known phenomenon. The Meituan Waimai app has spread on different continents in the last few years and is now operating across 52 countries, and numerous states in the world. Globally speaking, the top markets for the Meituan Waimai app are in:

There Is a Great Number of Food Delivery Apps in China

China has a great number of food delivery service platforms operating in their nation. Food delivery gained great popularity in China in the past few years, and there are many companies in this field operating today. However, some companies are much more successful than others. If you look at the table below, you can see which are the most downloaded food and drink delivery apps in China, and read a few words about each company.

If you find yourself in China anytime soon, you won’t have any trouble ordering your food online. As you were able to see, food delivery apps are quite popular in this Asian country and there are dozens of apps and restaurants to choose from, whether you are interested in delivery or takeaway options.

Everything is completely user-friendly, and you can use the apps in English as well. If you are a fan of Chinese food, which happens to be one of the most famous world cuisines, you must try it out while in China. Be free to try some of these most popular apps while in China, and figure out how they are compared to the Uber Eats platform. How Much Do Uber Eats Drivers Make? 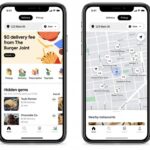 How Long Does It Take To Get Approved For Uber Eats? Is Uber Eats or Doordash Cheaper?